This beautiful thatched roof cottage known as Smugglers Cottage is a grad 2 listed building on the bank of the river Fal, this cottage is in the civil parish of philleigh between Truro and St Mawes north of the King harry ferry on the Roseland peninsula, it is made from slatestone rubble in the 17th century and was extended in the 19th century, this area was used for American trope assembly for D day embarkation on turnaware beach, General Eisenhower stayed in the cottage while he organized the D day landings and the 27,000 American troops that had gathered in the area for the D day landing, since the second world war the cottage has been run as a tea room you can get a regular ferry from Falmouth to the cottage, there is a granite memorial stone there to remember the D day landing in which so many American British and allied troops lost there lives.

The large ruff of skin that lies folded back against its neck is where it gets its name frill-necked, the frill is supported by long spines of cartilage that are connected to the jaw bones. When the lizard is frightened it gapes its mouth and the frill flares out displaying bright orange red purplish blue to a blueish black, the reaction is to discourage predators but it is all so used during courtship, this Lizard is rather large in size it can grow to 91.00 cm and it can run on its back two legs, how ever its body is darker than its frill and you can find them in many different colours, I found this one on a trip to Cairns I stopped just out side Cardwell with some friends and went for a walk in the Cardwell ranges, just to see what I could see I had only been walking for about half an hour, and there was two frill-necked lizard’s having a dispute over territory, I was able to get a good photo of one before they ran up a tree well separate trees of course, I moved away from there territory and found a spot to sit, and stayed for a few hours and got some good sketches of one with out its frill, most of the time they live in the trees and only come down to hunt or do some courting, or of course have a dispute over territory,

Koala some times called Koala bear but incorrectly, the Koala is a small slow tree-dwelling marsupial native to eastern Australia, having a stout body, thick grey-brown fur with a pale underside, large rounded furry ears, a leathery nose, strong claws, and a vestigial tail: it feeds largely on the leaves of certain eucalyptus and is the faunal emblem of Queensland.

The Blue-winged Kookaburra is a rather large kingfisher, that lives in the northern areas of Australia and the southern regions of New Guinea, I think of all the Kookaburras it is far prettier than any of the others and a little smaller than the others, this one I came across on a trip to Darwin, the medium I have used to draw this Kookaburra is Pastel I hope you like it.

In my front yard there are several big old gum trees, one with a deserted termites nest. This Little blue king fisher has made her nest in it, and she works so hard all day getting bugs for her young, I have had plenty of time to study her and put her on canvas. I hope you like the pastel drawing that I have done of it. 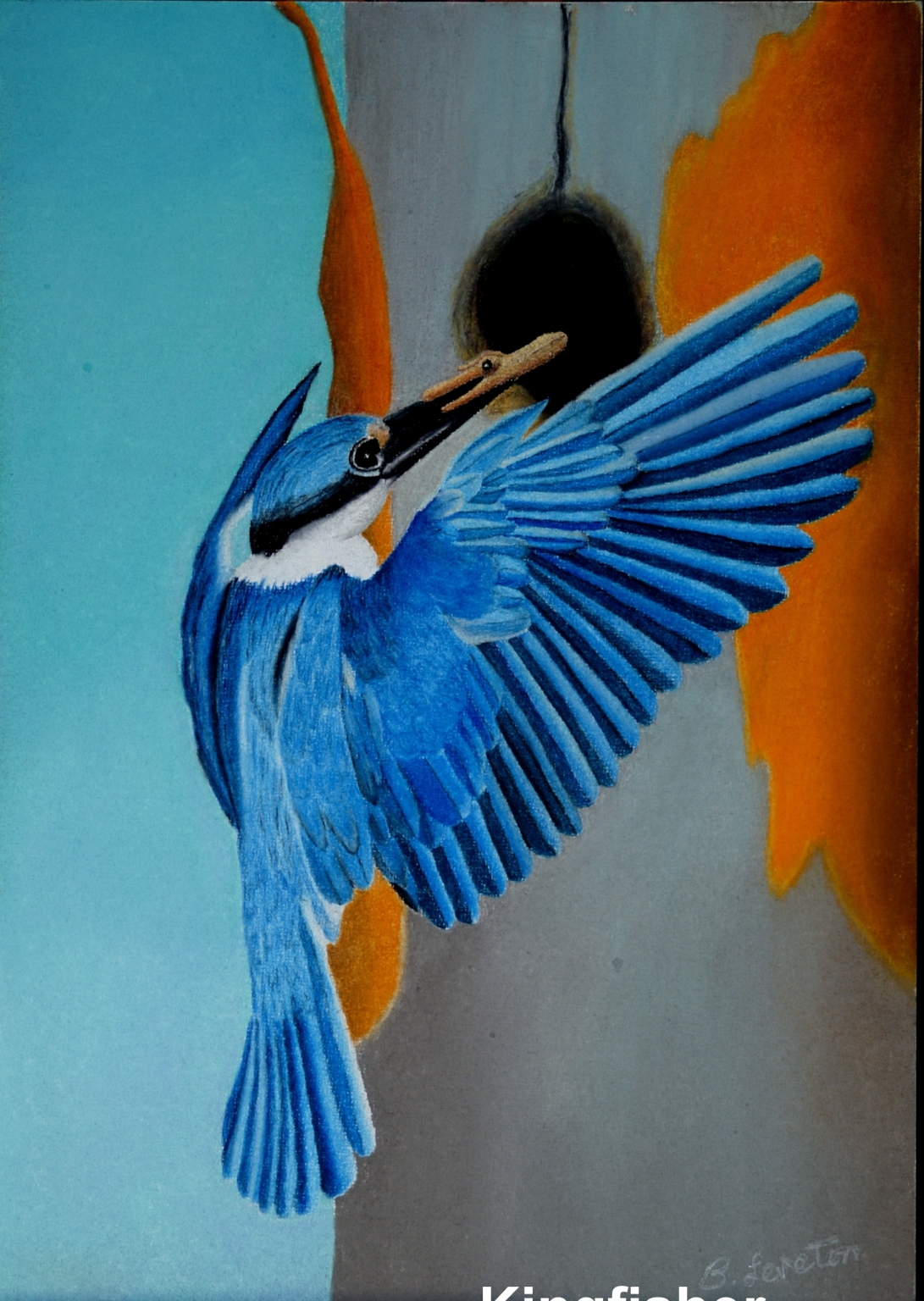 I have had people asking me why I don’t paint lady’s in the nude, Well I think lady’s look far sexier in some sort of clothing  like sexy lingerie it leaves a little bit to the imagination, this is just quick drawing so that I can get the right balance of color’s for the oil painting, this drawing was done in water color pencil I find they are  very useful and leave you with a nice picture. 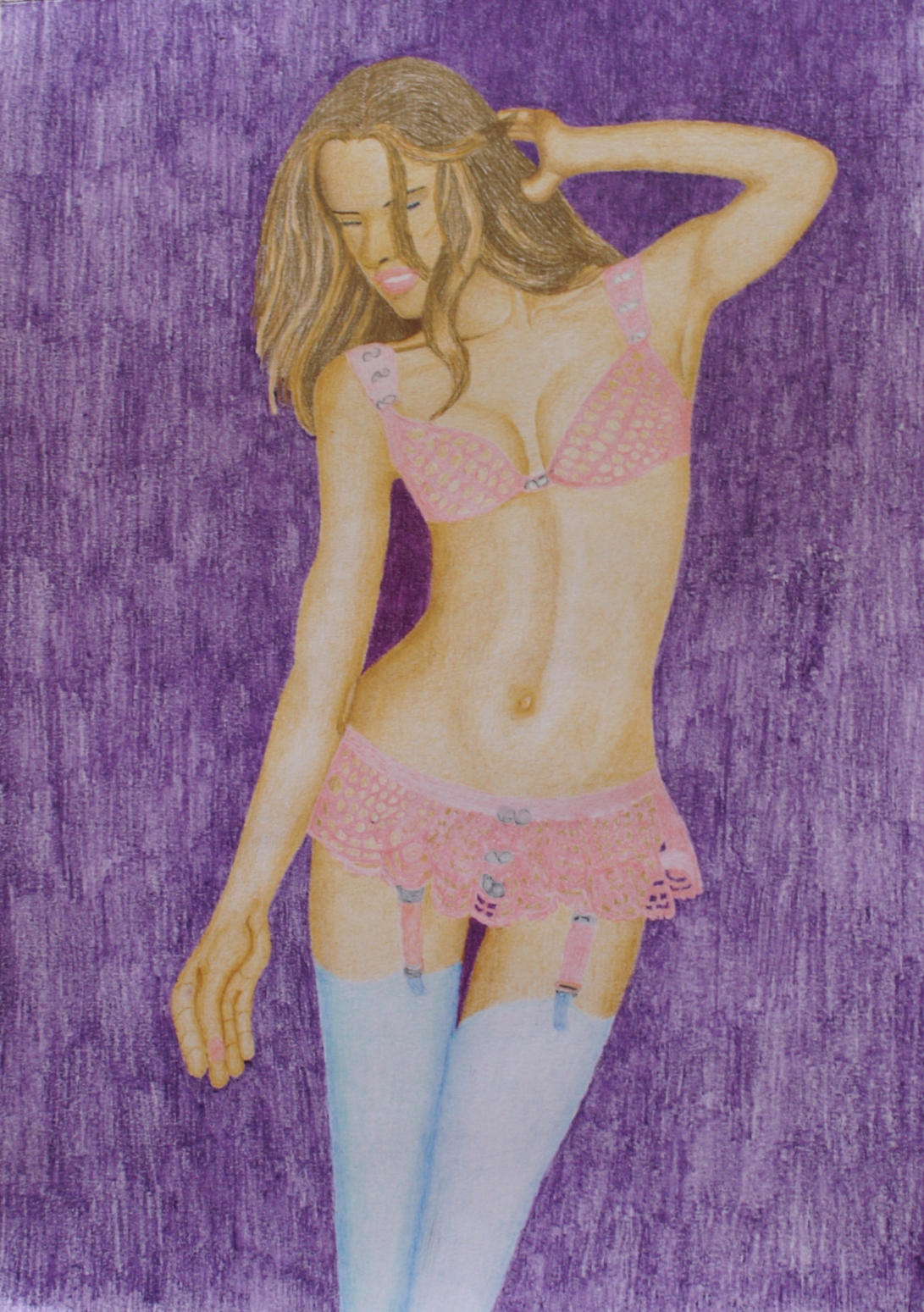 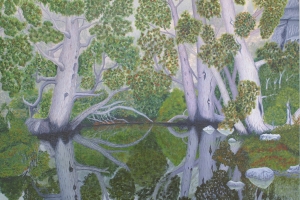 I call this painting Artist’s Pool. It was a long walk but very peaceful and the view was spectacular. I am so glad I took my Canon slr because I got some great shots of the Overland Track in Tasmania. It is so beautiful! To get to my pool you leave the Overland Track down to Lake St Claire which is a 2 hr walk down the side of the mountain. It a long way but well worth the effort. I sat down and took out my Faber Castells and my Canson sketch book and started drawing. It was so peaceful when I got there – I just wanted to stay and forget the world but the light ran out, so I had to finish this creation back at the studio. Sadly my photos were destroyed when our house burnt down but I still have this painting which happened to hanging in a gallery at the time.

25% Of funds from the sale of my art is donated to Cancer research, you can purchase my art in print format or as originals, the prints are on canvas with archivel inks, all purchases can be paid for through paypal.
A4 Prints au$155.00 + Postage
A3 Prints au$205.00 + Postage 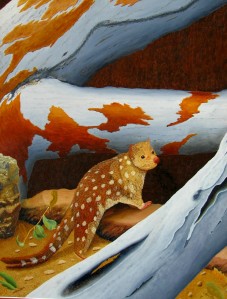 Once again this was one of those lucky shots. After camping for 6 weeks and extensively photographing and sketching the lakes area of Tasmania. I had just set up to photograph a waterfall when a quoll happened along. He was hunting around rocks on the edge of a ravine where some large gums were growing from the bottom of the ravine. No artistic licence has been exercised and you will note the injured tail which was unusually split, and the variation in fur colour. Quolls are a ferocious little marsupials, about the size of a rabbit, and they will eat anything they can catch.
This painting in Acrylic is for sale at $1,250.00 US Size H60cm x L44cm Fully framed ready to hang.  Prints are available on archival canvas for $155.00 US for A4 width 21cm x height 29cm. Or $205.00 US for A3 width 29 X height 42cm. 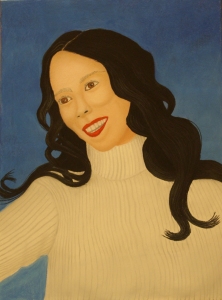 This portrait of Anna is a pastel drawing done with Faber castell pencil, This drawing was done for students in Sydney, I was doing the drawing for them and they copied the drawing, Anna is an Irish lass living in Cornwall with my wife’s brother Keith, they live in the quaint Little town of Redruth hope they and you like the drawing.